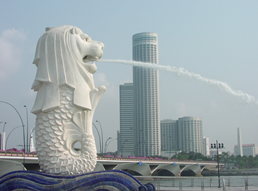 Singapore, a thriving, modern metropolis, strategically located at the southern tip of mainland Asia, continues to act as a major gateway for world trade.

Early historical records indicate an interest in the island by the Chinese where it is referred to as Pu-lo-chung (island at the tip of the peninsula). It was later to be named Temasek, or Sea Town, reflecting its humble beginnings as a fishing village and then, according to legend, Singapura or Lion City by Prince Sang Nila Utama who came upon the island during a hunting trip.

The city was then ruled by the five kings of ancient Singapore but its next important part in history was during the 19th century when the British, in thwarting the efforts of the Dutch in the area, became increasingly interested in forming their strong hold on the island. Sir Thomas Stamford Raffles, upon realising the potential of the island, formed a treaty with the local rulers and worked to implement a free trade policy, thus attracting further trade interests from Asia, and also from as far away as the Middle East and the US. With technological advancements, it was not long before Singapore became the centre of government for the Straits Settlement (also involving Penang and Malacca) and grew in importance in trade, bringing with it increasing prosperity and immigration - mainly Chinese, Malays and Indians.

This thriving community was soon to suffer under the invasion of the Japanese and the subsequent occupation which lasted for three and half years. During the surrender in 1945, Singapore was handed over to the British Military Administration which stayed in power until the dissolution of the Straits Settlement in 1946. Singapore then became a Crown Colony.

With the growth of nationalism came self-governance. In 1959 Lee Kuan Yew became the first Prime Minister of Singapore and led the PAP (People's Action Party) to victory. After the unsuccessful merger of Singapore and the Federation of Malaya, Singapore became an independent nation.